Or nackies as little b likes to say. He hasn’t quite got the “s” there just yet. Little b has just gotten into the apple scene. Typically I peel them but today I thought I would try something a bit different. I sliced, used a cookie cutter to de-core and then added raisins to the centre. I also added a small silicon cupcake case of peanut butter. Little b was not that impressed with the peanut butter at all. In fact he found it quite offensive and I feared it would end up smeared on the cat. Try them for yourself though as a quick and easy apple upgrade 🙂 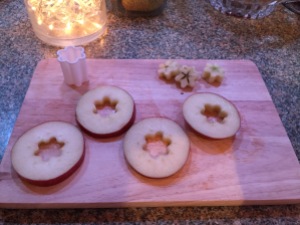 This site uses Akismet to reduce spam. Learn how your comment data is processed.

Help spread the word. You're awesome for doing it!